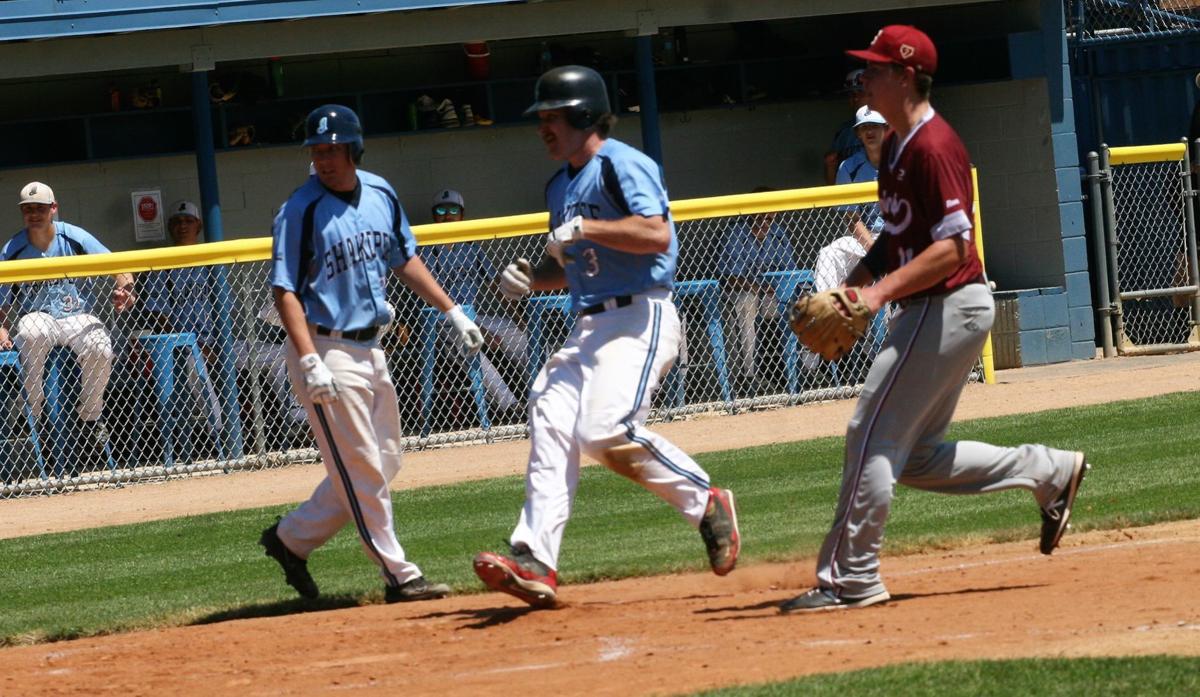 Alex Bade scores the Coyotes third run of the game against Cold Spring on a wild pitch. 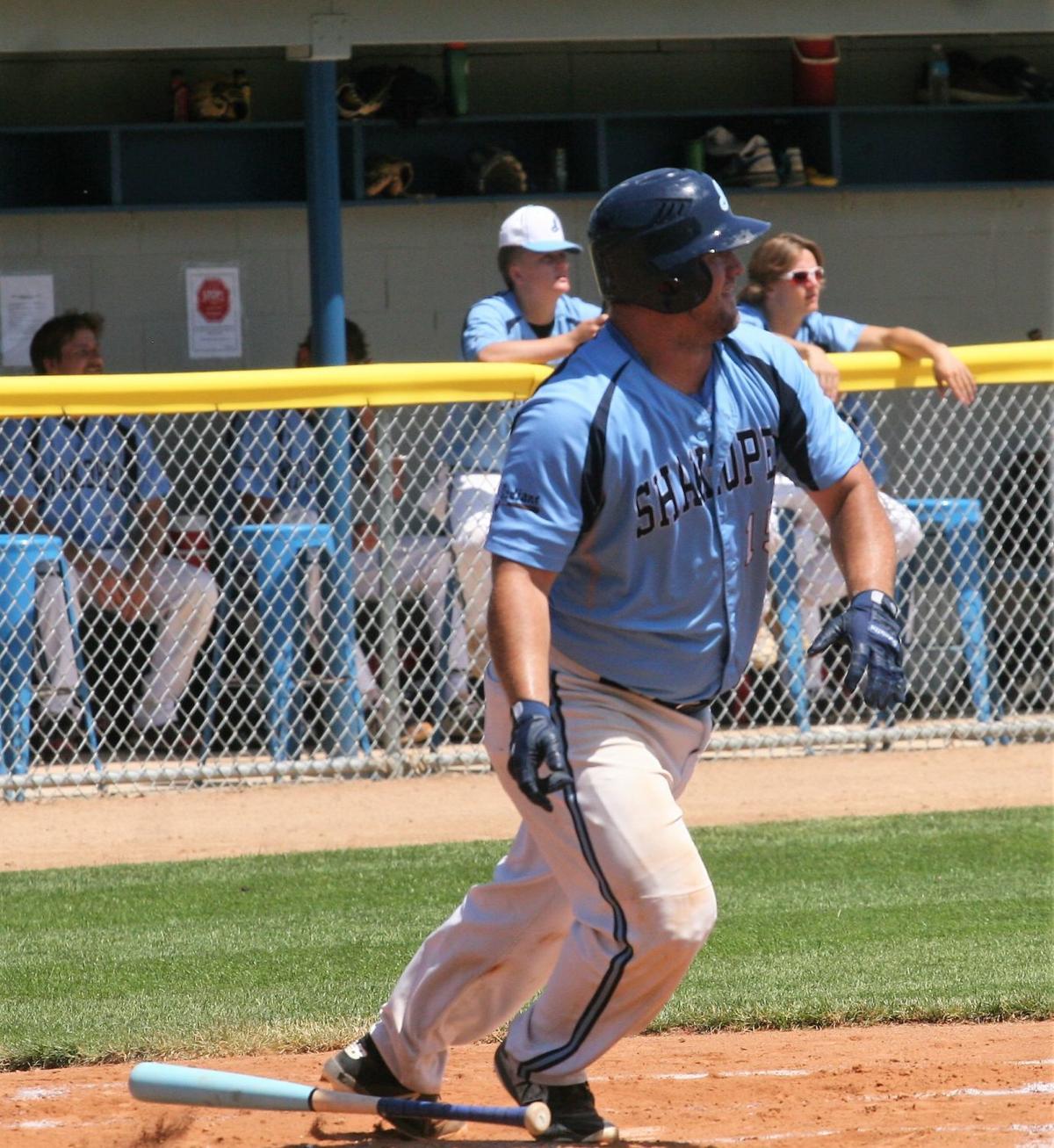 Jimmy Bombach hit a solo home run for the Indians against Cold Spring.

Alex Bade scores the Coyotes third run of the game against Cold Spring on a wild pitch.

Jimmy Bombach hit a solo home run for the Indians against Cold Spring.

It was an up and down season opening weekend for the Shakopee Indians.

They went 2-2 in the four games a Schleper Stadium as they got blown out in game one, followed that up by blowing a lead in game two, bounced back with a big win to wrap up the weekend and finished the four-game stretch with a walk-off win on Tuesday.

Shakopee opened the season with a 14-1 loss to Delano on Friday night.

They returned to the Joe on Saturday for two seven inning games against Cold Spring and Northfield.

“On Saturday, we played pretty solid baseball against two of the top Class B teams in the state,” Manager Gary Schleper said.

The first game against Cold Spring started off well but ended poorly as Shakopee gave up four runs in the top of the seventh to lose 7-6.

Shakopee went up 3-0 in the second inning on an RBI single from Jack Schleper that scored Jimmy Bombach from third. Alex Bade made it 2-0 with an RBI double down the right field line to score Patrick Rients. Bade would make it 3-0 as he scored on a wild pitch.

The Springers answered back with two runs in the third inning and tied it at 3-3 in sixth inning.

In the bottom of the sixth, Shakopee grabbed a 5-3 lead when Kollin Williams and Kyle Ryan would both score with two outs in the inning.

Things fell apart for Shakopee in the top of the seventh inning.

With one out, Cold Spring strung together a hit and two walks to load the bases.

The Springers’ Jack Arnold cut the lead to 5-4 with RBI single and a wild pitch tied the game at 5-5.

A Brian Hanson double cleared the bases to give Cold Spring a 7-5 lead.

Shakopee cut the lead to 7-6 in the bottom of the seventh on a Jimmy Bombach home run but stranded two runners on base to end the game.

“We let the Cold Spring game slip away in the last inning, but we had some opportunities to score some runs earlier that would have helped in that last inning,” Schleper said.

Shakopee took a break as Cold Spring and the Northfield Knights played before the Indians returned to action for the night cap against Northfield.

Shakopee salvaged the weekend with a 6-2 win against Northfield.

The Knights went up 2-0 in the first inning but Alex Schneider kept them off the board the rest of the game as he earned the win by pitching six strong innings giving up just two runs on five hits.

Justin Winterfeldt tied the game up for the Indians with a two-run home run in the bottom of the second inning.

Shakopee added single runs in the third and fourth innings and iced the game away with two more in the bottom of the sixth inning.

Shakopee returned to the Joe on Tuesday night for a game against the Minneapolis Mudcats that they won 2-1 with a run in the bottom of the ninth inning.

The Indians went up 1-0 in the first inning when Kyle Ryan scored on Bombach’s RBI groundout.

Shakopee’s pitchers made that lead stand until the ninth inning when the Mudcats scratched across an unearned run to tie the game at 1-1.

In the bottom of the ninth, Dominick Schleper led the inning off with a single and moved to second on an error.

After a sacrifice bunt put Schleper at third with one out, Tom Koenen drove in the winning run with a fly ball to centerfield to score Schleper and give the Indians the 2-1 win.

Pitchers Caleb Kranz, Alex Schneider, Zach Henderson and Allex Ege combined to give up just three hits to Minneapolis in the win.

The Indians have the Fourth of July weekend off but return to play on Tuesday when they host the Blaine Fusion at 7:30 p.m.

They hit the road on Thursday, July 9 when they take on the Victoria Vics in Victoria.

They wrap up the week by hosting the River Valley League’s newest team, Excelsior, on Friday night at Schleper Stadium.