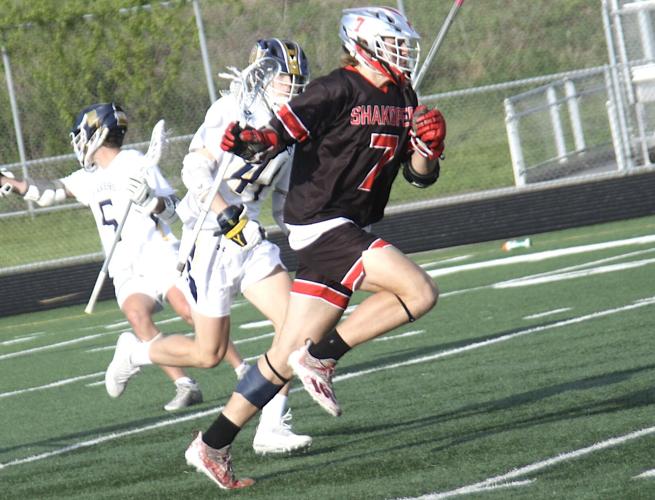 Senior Jonathan Wamsley heads up the field with the ball in Shakopee’s 11-10 South Suburban Conference loss at Prior Lake May 19. 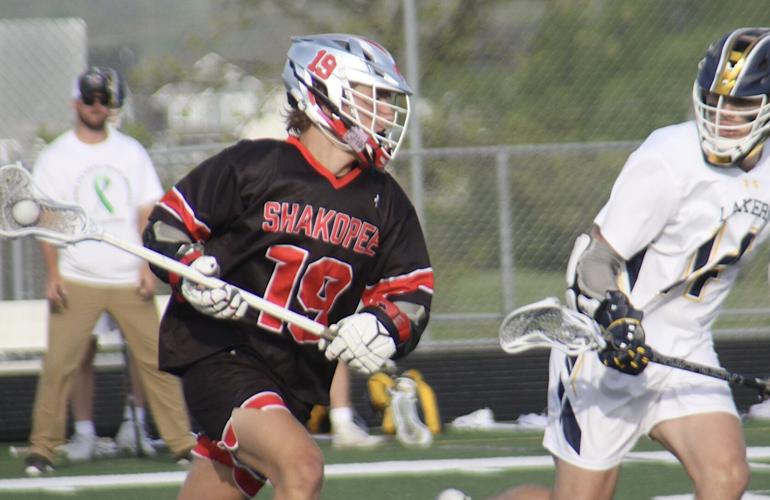 Junior Harrison Vega has control of the ball in Shakopee’s 11-10 loss at Prior Lake May 19 in South Suburban Conference play.

Senior Jonathan Wamsley heads up the field with the ball in Shakopee’s 11-10 South Suburban Conference loss at Prior Lake May 19.

Junior Harrison Vega has control of the ball in Shakopee’s 11-10 loss at Prior Lake May 19 in South Suburban Conference play.

The Shakopee boys lacrosse team was denied the South Suburban Conference title and likely the No. 1 seed in Section 2.

The first round of Section 2 play starts May 31. The quarterfinals are June 2, followed by the semifinals June 7 and the title game June 9. The higher seed is at home throughout the playoffs.

For complete brackets when they become available, go to mshsl.org/section-events.

In the loss to Prior Lake, the Sabers were up 6-1 when Prior Lake scored a goal with nine seconds left in the first half. That goal may have given the momentum the Lakers needed in the third quarter.

The fourth quarter was more defensive. The Lakers scored with 8:09 left to play to go up 11-9. Junior Linus Toward tallied with 6:23 remaining to make it a one-goal deficit.

Shakopee had a couple possessions with under four minutes to go but turned the ball over. Prior Lake played keep away to run the clock out.

The Sabers’ had one conference loss last season and that was by the same margin to Prior Lake.

Toward and senior Luke Whitbeck each had two goals and an assist for the Sabers in this year’s loss, while senior Colton Maskevich had three goals. Senior Jere Huson, sophomore Jake Marschall and junior Gavin McNee each had one goal.

In the win over Wayzata, Shakopee scored two goals in all four quarters en route to the win. Whitbeck powered the offense with three goals and four assists, while Toward had three goals and one assist.

Senior Alex Kellogg had two goals for the Sabers, while Maskevich picked up an assist.

Brosam made nine saves in goal.

Kellogg and juniors Zane Orchard and Harrison Vega each finished with two goals, while ninth-grader Landon Toward, junior Jadon Hellerud, senior Tyrus Laden and sophomore Tanner Bachelor all scored once.

This year’s state tournament will start June 14 with the quarterfinals, followed by the semifinals June 16 and the title game June 18. Roseville and Stillwater High School are the venues.

Top-ranked Benilde-St. Margaret’s is the defending champion, beating Prior Lake 16-6 in the final last spring.