Free access for current print subscribers
Get Started
You are the owner of this article.
Edit Article Add New Article
You have permission to edit this article.
Edit
Subscribe
Communities
Home
News
Sports
Obituaries
Classifieds
Contact Us
Share This

Thompson posted bail for $1,000, and the judge ordered him not to have any contact with the Shakopee school district or its computer systems. He is scheduled back in Scott County District Court on Friday, July 6, for his first appearance on the four new charges.

Thompson is awaiting trial in November on 21 other criminal charges alleging he embezzled nearly $74,000 over five years from the school district. The district terminated Thompson’s contract on June 30, 2017. 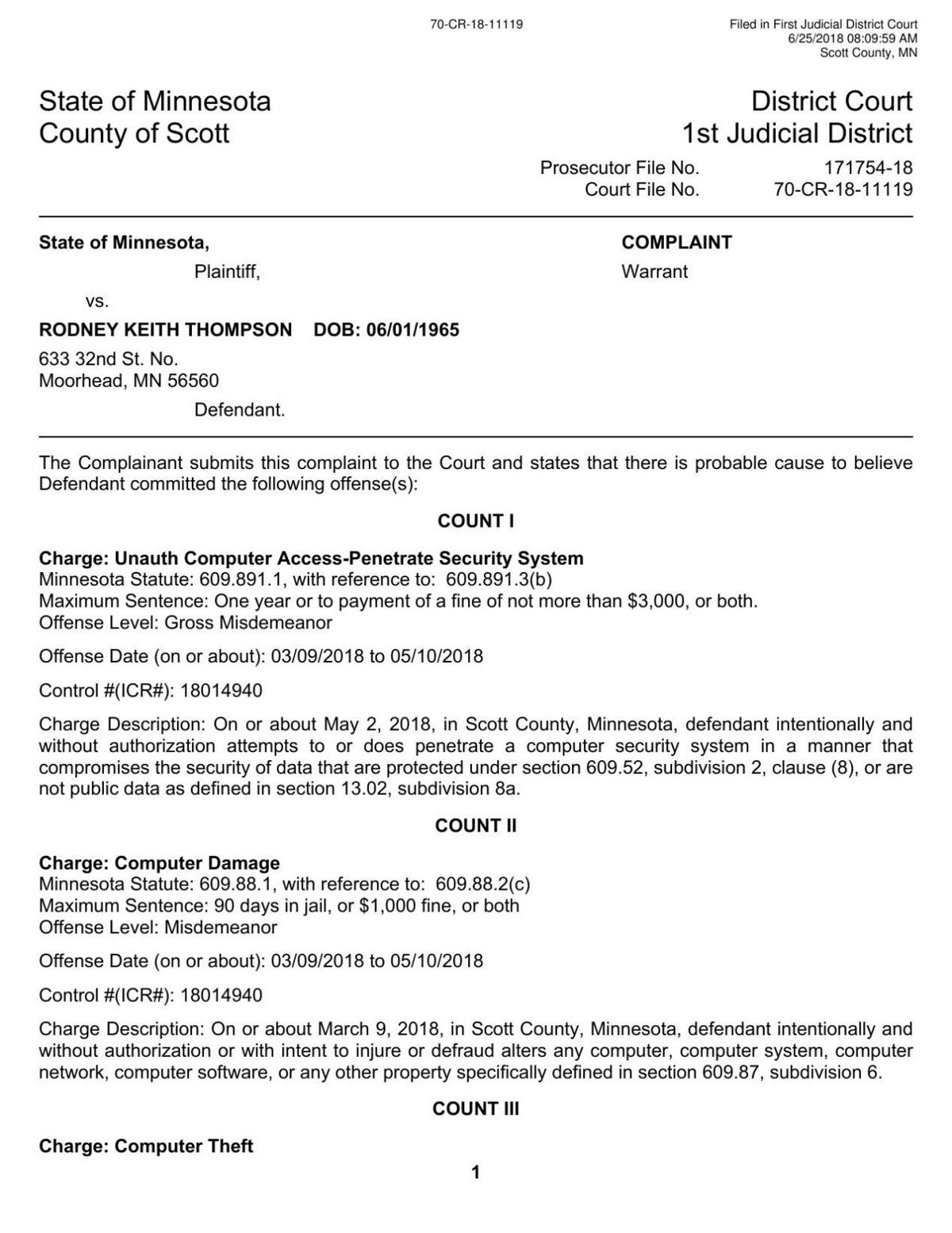 According to the new charging documents, the Shakopee school district discovered suspicious activity on its Google Drive account in May. The email address shakopeesuperintendent@gmail.com was accessing Drive files shared among employees, but that email address is not an approved school district address.

After police accessed the account with a search warrant, they learned the recovery email address for the account was thompsonrodk@gmail.com and the associated phone number was also registered to Thompson. The email address has existed since July 2012.

According to the complaint, police spoke with Interim Superintendent Gary Anger, who explained employees don't have access to school district information after termination, and they are required to disclose and assign the rights to the school district for any work product developed or created with district equipment or on district time. Employees are also required to keep account information and passwords on file with the district, and they are prohibited from accessing school systems with any accounts other than those assigned by the district.

The district did not assign shakopeesuperintendent@gmail.com to Thompson during his employment, nor did Thompson report the account information to the district or keep his password on file, the complaint states.

In order to access the documents on his personal email account, Thompson had to share the Drive files with himself using his approved district email address before his employment ended and he subsequently lost access to it.

In January, Thompson allegedly accessed a Google Drive file titled "Academies of Shakopee Master Plan - Final." In March, he allegedly changed the link sharing visibility on the file from "anyone" to "private," and the link sharing from "can view" to "none," which affected everyone's access to the document.

In April, Thompson allegedly viewed and downloaded five files from the Drive. In May, he allegedly accessed a file with the Academies placement list in it, which includes private student information like names, special education designation, ethnicity, gender and student ID numbers. The information is not public data under Minnesota state statute.

In May, he also allegedly downloaded a file from the Drive.

Shakopee Police Chief Jeff Tate said he's thankful to the school district for being so cooperative in the recent developments.

"I want to thank Gary Anger for working well with our staff on this. It took a while to get our subpoena answered, but they alerted us right away when they found this and we were able to work through it right away," Tate said.

Check out our special investigations page on this case here.

This is a developing story; check back for updates.