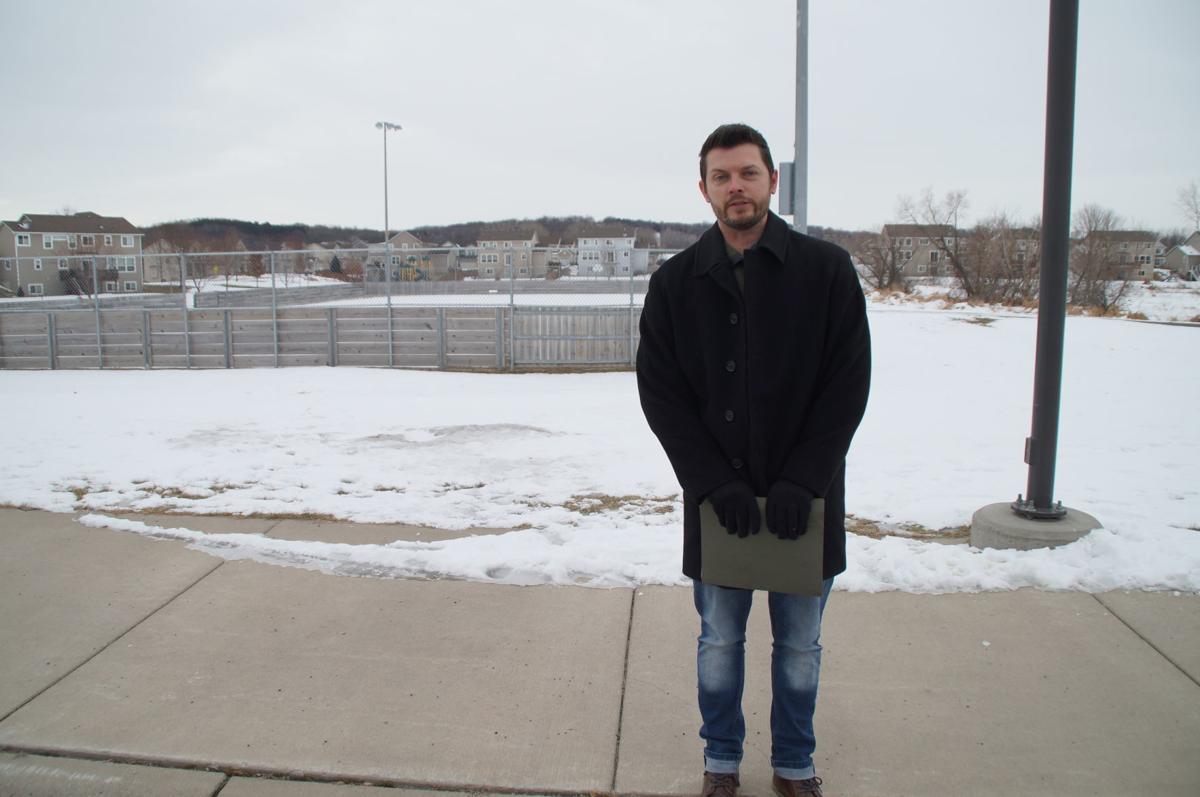 Jess Lowenberg, a Shakopee resident, stands outside the ice rink at Riverside Park, near his house. He said the rink used to be filled with kids and brought the neighborhood together before the city stopped flooding it this year. Lowenberg attended the Jan. 13 Parks and Recreation Advisory Board meeting with neighbor Erik Radtke. 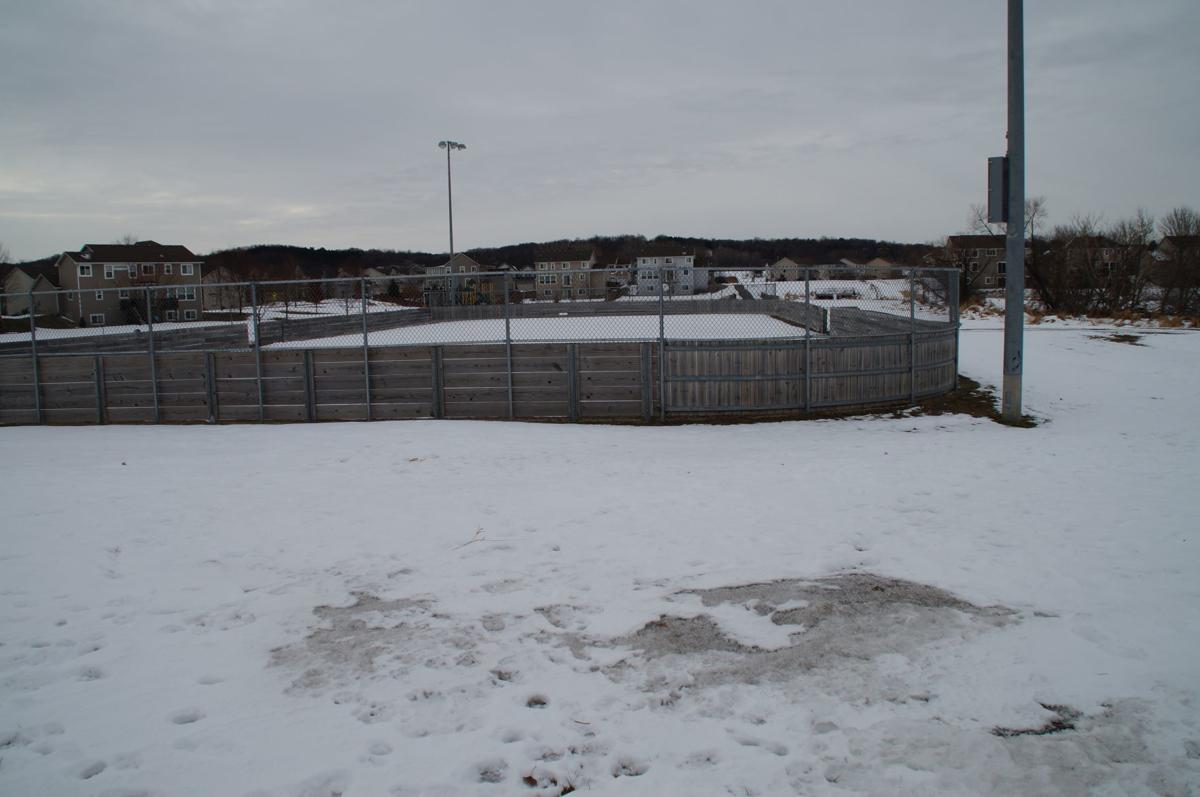 The city stopped flooding the ice rink — for budgeting reasons — at Riverside Fields Park, which was built six years ago this winter.

Jess Lowenberg, a Shakopee resident, stands outside the ice rink at Riverside Park, near his house. He said the rink used to be filled with kids and brought the neighborhood together before the city stopped flooding it this year. Lowenberg attended the Jan. 13 Parks and Recreation Advisory Board meeting with neighbor Erik Radtke.

The city stopped flooding the ice rink — for budgeting reasons — at Riverside Fields Park, which was built six years ago this winter.

Jess Lowenberg stood in front of the vacant ice rink at Riverside Fields Park Wednesday and shook his head.

The past several winters, the rink was home to neighbors who became friends as their children played casual hockey games with each other. It was a place where they gathered to enjoy hot chocolate and the sound of blades shaving the ice. It's where his 4-year-old daughter and 7-year-old son learned how to skate. It's where on any given winter night, there were usually 12-14 neighborhood kids could be found skating, he said.

“It’s kind of the center of this whole neighborhood,” Lowenberg said. “We just want it back.”

The day before, on Tuesday, Jan. 7, the Shakopee City Council decided to adhere to an earlier decision to close the ice rink, despite a circulating petition signed by 510 people to keep the rink at the park — just east of Dean Lake — open. The rink was nixed due to the 2040 Parks and Recreation Master Plan citing budgeting and efficiency reasons. Members of the Riverside neighborhood crowded the council chamber that evening to show their support in keeping the ice rink open.

“Of the ice rinks getting cut, Riverside Fields neighbors are the only ones fighting to save their rink,” Lowenberg, who organized the petition, wrote to the city council. “Please listen to us, look at all the facts, and give us one more winter to prove to you that the ice rink is worth keeping.”

City officials expressed frustration in the delayed feedback from community members who they say had a year to provide input to the Parks and Recreation Advisory Board before any of the changes were implemented. Community members are upset by the council's unwillingness to reverse a decision residents called an oversight.

The Riverside Fields ice rink costs about $16,000 to maintain each year, according to the city, and that money needed to be mitigated somehow to accomodate for the changes implemented in the parks plan. The rink was installed in 2013 and according to a memo sent to the city council from City Administrator Bill Reynolds, the boards and lights alone cost the city $86,000 worth of equipment. That money would be saved should the city relocate the rink to Lions Park, which is the tentative plan. Reynolds was not sure how much moving and re-installing the boards and lights would cost.

The warming house at the ice rink will stay as a rental space for community members, according to the city. The next-nearest ice rink is about a mile away at Southbridge Community Park, but Lowenberg said it is outside of walking distance for children due to the busy roads they would have to walk on to get there.

The city council’s decision to close the rink came after what city officials said was a yearlong process of searching for public input.

“It is the staff’s opinion that this was well researched,” Reynolds said. “In fact, this was the most well researched plan we had, aside from our comprehensive plan.” He added there were 14 community meetings held to garner public input throughout the process of deciding where to consolidate the city’s ice rinks to cut down on operational costs. Notices were sent out via email and social media.

Shakopee Mayor Bill Mars said he was disappointed he was hearing the residents’ complaints after the change had been implemented instead of during the yearlong process. One resident spoke in response to his remark, claiming she had never been notified that her neighborhood’s rink would be impacted by the parks master plan.

“We can’t force you to read (the notices),” Mars said. “I do think outreach has gotten substantially better in the last few years.”

“From the stuff (the city) sent out, everything looked great,” Lowenberg said about the future of Ridge Creek Park, adjacent to Riverside Fields, which is slated to be a passive park instead of an active one, meaning it will have more trails and natural features. Ridge Creek Park will highlight the history of the site by incorporating trails throughout the wetlands and a corn crib overlook.

The city’s Parks and Trails Master Plan mentioned significant changes being made to Ridge Creek Park but did not specifically name Riverside’s rink as one of those to be eliminated.

“No notices were sent out specifically saying any part of the plan was being highlighted, but we reached out in every way through traditional and social media to get people interested and to provide input,” Reynolds said. “There were lots of posts and appeals talking about the main areas, which included the development of Ridge Creek Park.”

Mars also said he believes all parks must change and evolve, and this is one example of change that is necessary, though it might be hard for residents to accept.

“For me, it brings me back to my youth,” he said. “Change is difficult.”

Lowenberg said when he and his neighbors noticed the rink wouldn’t be flooded this winter, they tried to get in touch with city staff to reverse the decision and “admit an oversight.”

In a Dec. 23 email sent a Riverside resident, to Parks and Recreation Director Jay Tobin, the resident asked if they could meet up with Tobin to get some questions answered about the closure of the rink.

“We are all open minded and invested in the future of Shakopee, however, we want to make sure the city is making a good decision for a very young and growing area of Shakopee with many active young families,” the resident wrote.

Tobin responded by “respectfully declining” a sit down meeting until after the Jan. 7 city council meeting, writing he spoke several times with members of the Riverside neighborhood about their concerns.

“Sadly, the data and the spirit of those conversations were misrepresented at the council meeting in my opinion,” Tobin wrote. “Meanwhile, some of your neighbors continue their social media efforts of hijacking every thread that the City and Parks and Recreation publish on social media — which doesn’t seem to represent the open mindedness you speak of.”

When asked by the Valley News why city staff refused to meet with residents ahead of city council meetings, Reynolds reiterated that the city had been imploring for input over the course of 12 months and held “more than several” community input meetings. Now, Reynolds said, the decision was in the hands of city council members, not staff.

All council members were in alignment Jan. 7 to affirm the earlier decision to move forward with the parks plan, which meant scratching the Riverside rink, except for council member Matt Lehman.

“When we have this many people coming to us who are our constituents, we are supposed to listen,” Lehman said. He previously voted against the parks master plan and said this issue was part of the reason. “I have no problem keeping your ice rink open.”

In a Jan. 8 Facebook post made by council member Jodi Brennan, who participated in the city’s Parks and Recreation Advisory Board, she aired frustration that Lehman only showed up to one-third of all the advisory board meetings and never told her how he felt about the rink.

“Maybe Matt feels that it is easier to go to a Council meeting and vote no than to actually be a part of the year long process of putting a parks plan in place,” Brennan wrote. “He never told me that he was not able to attend a meeting nor asked me to pass his views on to the committee.”

Lehman responded to this post in a written statement to the Valley News, arguing he missed many of the meetings for work purposes and on one occasion was not notified of the meeting. He also said he did offer his comments and concerns but it wasn't what the majority wanted.

"I believe Brennan is doing what she thinks is best," Lehman wrote, and "I believe I am doing what's best."

During Tuesday's council meeting, Lehman made a motion to keep the rink open, but it failed. The vote to affirm the council’s initial decision to close the rink passed four to one, with Lehman dissenting.

As the Riverside neighbors filed out the chamber doors following the vote, one woman booed.

“Thank you,” Mars said. “We appreciate your passion.”

Reynolds said ultimately the decision to close the rink was about being good stewards of tax dollars and looking for what is best for the community as a whole.