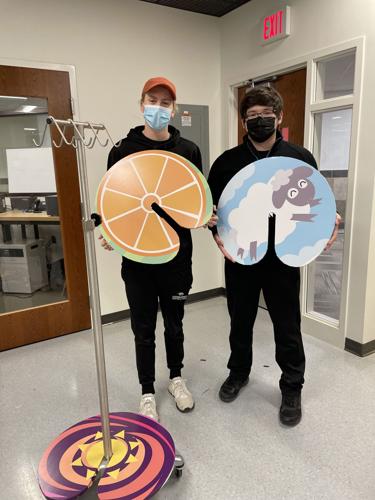 Students were creative when deciding how to decorate their lily pads. Pictured are students Benjamin Thompson and Christian Yun with some examples. Materials included soft fleece fabrics, paints and vinyl decals designed by members of the high school’s art club. 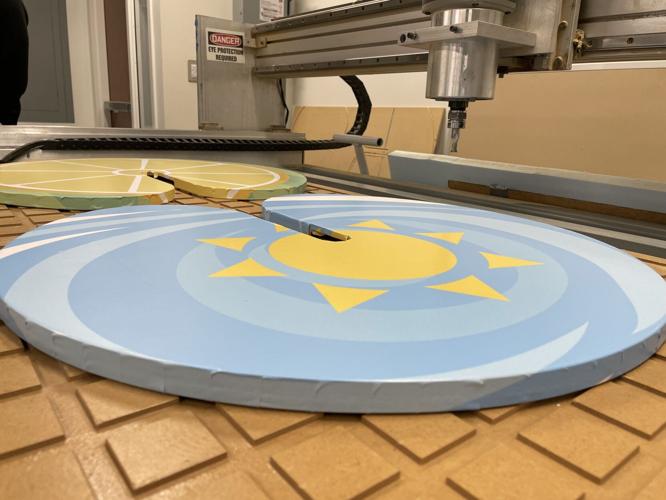 There were 20 unique lily pad prototypes made by the students. Each one was made using different materials, designs and creation methods.

Students were creative when deciding how to decorate their lily pads. Pictured are students Benjamin Thompson and Christian Yun with some examples. Materials included soft fleece fabrics, paints and vinyl decals designed by members of the high school’s art club.

There were 20 unique lily pad prototypes made by the students. Each one was made using different materials, designs and creation methods.

Pediatric patients can then sit on the lily pads when hooked up to an IV and be transported around the hospital space. This lessens the chance of IVs being disconnected while moving children, and also allows for a fun riding experience.

At the start of the school year, Centicare reached out about partnering with students participating in the high school’s Engineering and Manufacturing Academy and CAPS class.

The classes are taught by TJ Hendrickson, a technology and engineering teacher at the high school. Twenty-three juniors and seniors in Hendrickson’s classes participated in the lily pad project.

The prototypes also had to maintain their integrity after daily cleaning and withstand a minimum of 60 pounds of weight.

Hendrickson said beyond building the lily pads, each group worked together on presenting their research, cost analysis and other factors — similar to a “Shark Tank-like business presentation.”

Senior Aindri Mishra said it was a brand new experience being placed in the real-life scenario of working with a company.

“As the project went on, I began to understand that this is what it’s like to work for a company and meet what they want and what they specified,” she said. “That wasn’t really something I ever had to do before, so that was interesting.”

The engineering students also collaborated with the high school art club. Mishra, a member of art club, reached out to the group about developing lily pad designs.

The art club students got back to her with a variety of different decals they thought children may enjoy. The engineering students were then able to print out the designs on a vinyl printer and stick them onto the lily pads.

According to Centicare, other lily pad designs were created using paint or covering the molds with a soft fleece fabric. Each prototype had a completely unique decal design.

Hendrickson said the students had to thoroughly consider which type of designs would be best for children to see in a hospital setting.

“There’s a whole lot of research behind the graphics hospitals are using right now to cause people to relax. Even color schemes can affect your subconscious and how you heal … so there was actually a lot of discussion behind these,” he said.

Senior Madeline Eslinger said it became somewhat of a competition between the groups to see which prototypes could be produced in a cost-effective and efficient way.

Students created 20 unique prototypes by the end of the project. Eslinger said once all prototypes were completed, each group presented their respective designs to the class. The students then decided which ones would be best to present to Centicare.

Hendrickson said having a wide variety of prototypes was also ideal for Centicare to display multiple options to hospitals.

“What they’re doing is taking them to various hospitals to decide which they like because every facility has different pros and cons,” he said. “That’s why the kids came up with all the different choices.”

After being presented with the final designs, Centicare is now planning to work with a local pediatric hospital. Lily pads and IV stands will be donated to the hospital, according to a company statement.

Students making the lily pads said it meant a lot knowing their project would have a real-life impact on children’s lives.

“It was very motivating knowing that you’re making something that’s going to make someone’s life better when they’re in this tough situation,” senior Christian Yun said.

Beyond making a difference in the patients’ lives, the entire project also provided students with real-world experiences ahead of their future college or career plans.

Hendrickson said he’s taught some of these students since seventh grade and has enjoyed watching many of their interests in the field grow over time.

“The fun part of project-based learning is you learn by doing rather than somebody sitting there preaching to you all the time,” he said.

Throughout the project, the students learned to use different machines, work with new materials and consider the manufacturing processes that go into creating products.

“I think our engineering programs do a really good job of showing us the design process, but never the manufacturing process. We’ve talked about that in class — it’s where we’ve kind of faltered before,” Eslinger said. “So I thought this project was really cool in learning all of that, and it was really beneficial to gain that manufacturing knowledge.”

Mishra said what stood out to her with the project was gaining new experiences while knowing the end result could make a difference in the lives of young patients.

“Obviously, being in the hospital at that young age isn’t going to be fun,” she said. “But having small things like [the lily pads] where it’s a little ride, and there’s a fun design on top of it … it might make the experience a little bit better than how it would normally be.”