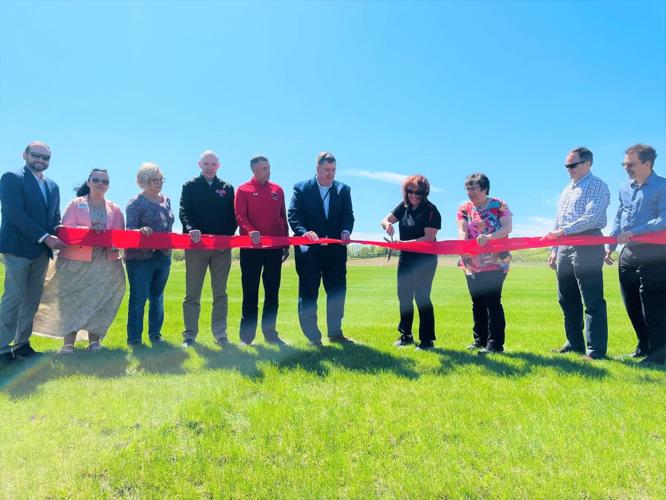 District and city employees celebrated Saber Fields with a ribbon-cutting ceremony on May 16. 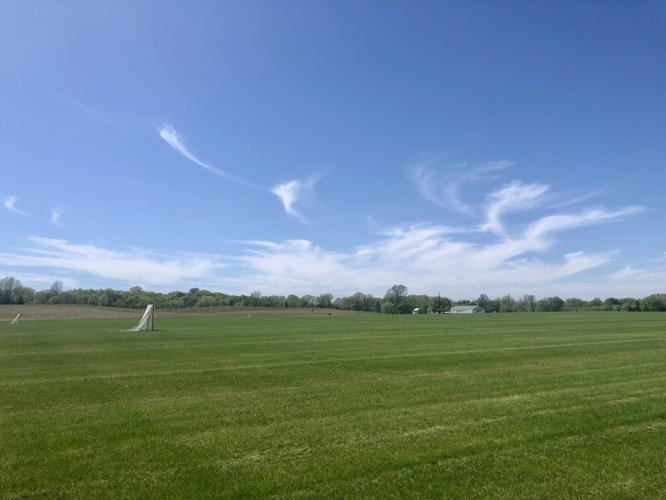 Saber Fields is a 106-acre space located at 13190 Townline Avenue in Shakopee. 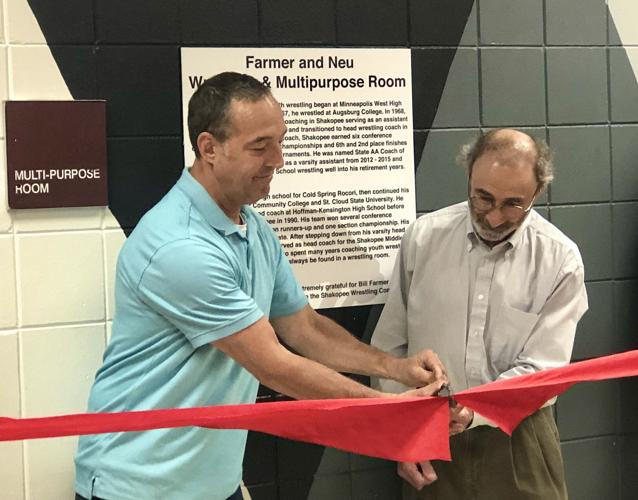 Mark Neu (left) and Bill Farmer (right) cut the ribbon for the Farmer and Neu Wrestling and Multipurpose Room at West Middle School. 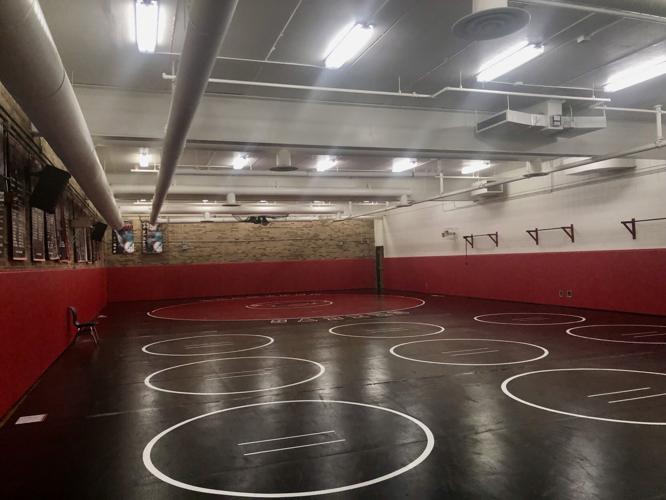 The Farmer and Neu Wrestling and Multipurpose Room.

District and city employees celebrated Saber Fields with a ribbon-cutting ceremony on May 16.

Saber Fields is a 106-acre space located at 13190 Townline Avenue in Shakopee.

Mark Neu (left) and Bill Farmer (right) cut the ribbon for the Farmer and Neu Wrestling and Multipurpose Room at West Middle School.

The Farmer and Neu Wrestling and Multipurpose Room.

Shakopee Public Schools held a ribbon-cutting ceremony May 16 to celebrate Saber Fields — a 106-acre space on Townline Avenue that will be used for athletics and youth activities.

Superintendent Mike Redmond said the complex will be an asset for students and the community.

“It’s just awesome to also be able to honor people who have made great contributions to our school district and community like Bill Farmer and Mark Neu with that multipurpose room over at West,” Redmond said.

According to Redmond, the district’s community facilities task force decided around 2019 that the fields should be used as a recreational space.

A committee made up of school board members, district staff and community members also came up with about 20-30 names in 2021 before landing on Saber Fields, Redmond said.

A district news release stated that Saber Fields will be used to “offer various rental options for community members and visitors such as athletics teams, sports organizations/tournament coordinators and outside organizations.”

Jaime Grossman, the district’s facility use specialist, said youth lacrosse has been using the space this spring. He anticipates that Saber Fields can also be used for activities like youth football and soccer.

“I think it’s just great for the kids … it’s great to see them out here using the space,” Grossman said.

Athletic Director Matt Hanson added to that, saying the space is great for the Shakopee community. “This is huge. Our community is growing exponentially right now … we’ve had a need for a couple years now, so I think this addresses that need for all those groups,” he said.

Saber Fields will soon add historical signs to the land. CAPS interns at Shakopee High School worked with the Scott County Historical Society and the Shakopee Mdewakanton Sioux Community to create signs showcasing the history and importance of the land.

According to the district, the signs will include Dakota history, providing information on founders, people who previously lived on the land and surrounding infrastructure and attractions. They will be added to the Saber Fields space at a later date.

“Our students did a ton of research and put together the template or prototype for what would be public communication about some of the key elements of the history of that space in our community,” Redmond said.

While plans aren’t set, Redmond said the Saber Fields site could be used in the distant future for a new elementary or middle school building. “With the rising price of land in our area, it feels good to own this property and have it available should our community continue to grow in the future,” he said in a district statement.

A ribbon-cutting ceremony was also held to celebrate the Farmer and Neu Wrestling and Multipurpose Room at West Middle School.

Farmer began teaching and coaching wrestling in Shakopee in 1968, later becoming the head wrestling coach from 1972-2001. Farmer returned to the program as a varsity assistant from 2012-2015 and helped coach middle school wrestling through retirement.

“It’s a great acknowledgement for Bill Farmer and Mark Neu, who spent a lot of years doing a lot of coaching … and are held in incredibly high regard in our community,” Redmond said.

District staff and community members met with Farmer, Neu and their families to celebrate the new name.

“The thing that makes this honor so fantastic for me is that I get recognized with Mark Neu,” Farmer said at the ceremony.

“It was pretty special to get the community to support this room …it being named after us is very humbling,” Neu added.