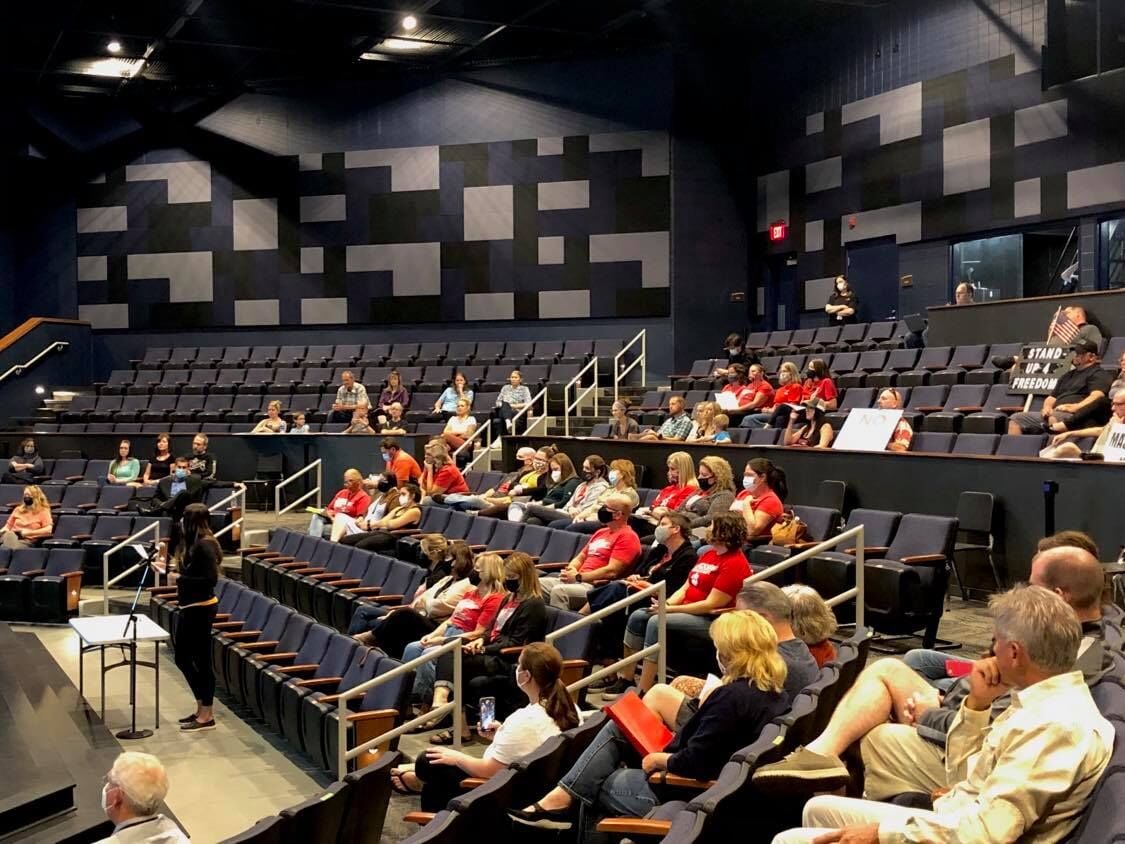 Shakopee resident Amanda Enright addresses the school board among attendees. 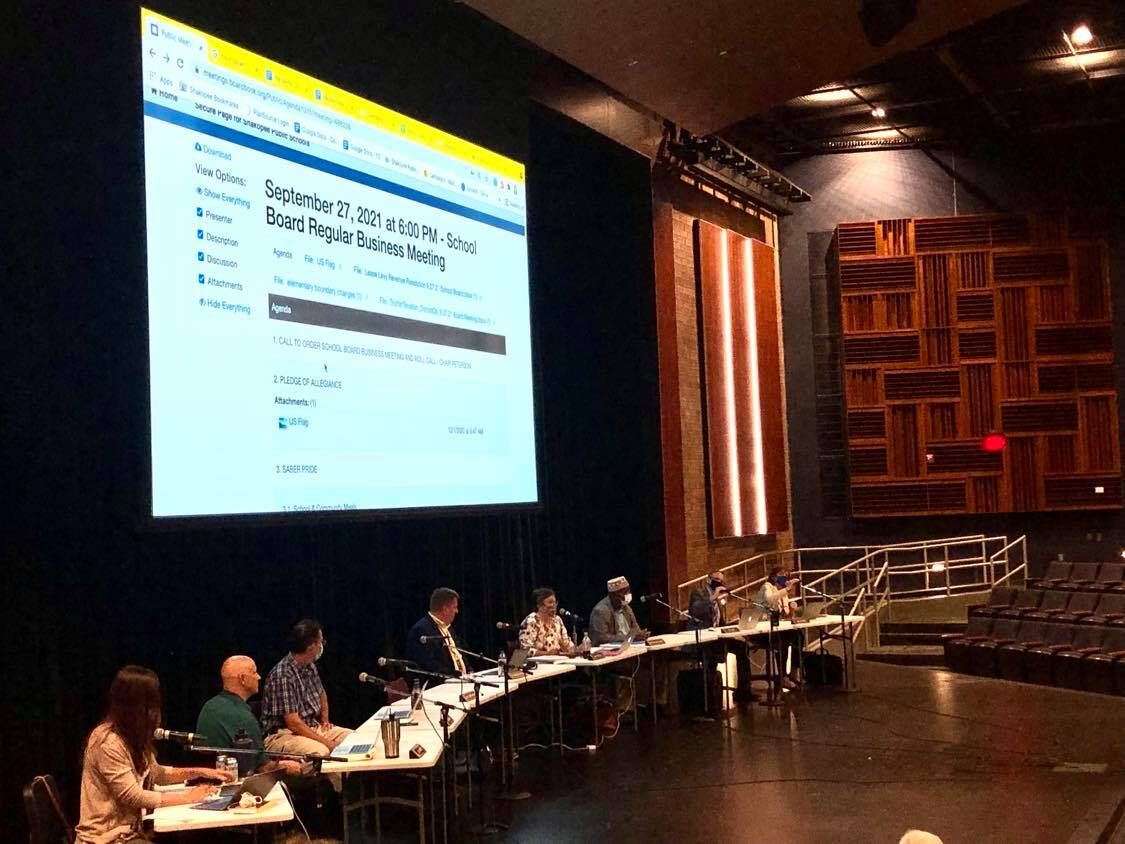 The Shakopee School Board met Monday night at the Thrust Stage.

Shakopee resident Amanda Enright addresses the school board among attendees.

The Shakopee School Board met Monday night at the Thrust Stage.

The Shakopee School Board passed a motion to revise its masking policy at its Monday night meeting on the Shakopee High School Thrust Stage.

The rolling average in Scott County as of Tuesday was 37.7, according to the School District website.

The motion carried with a 6-1 vote. Board Member Paul Christiansen was the sole member to vote against the motion.

At a Sept. 13 School Board meeting, a motion was made by Christiansen and seconded by Board Treasurer Joe Aldrich to send proposed additions back to the Pandemic Response Advisory Team (PRAT) for reevaluation.

PRAT then met within the last two weeks to update its recommendations. The team is composed of Shakopee students, parents, teachers, school board members, Superintendent Dr. Mike Redmond and other community members.

The advisory team’s members reached the consensus that a mask requirement should be implemented if the 14-day rolling average of positive COVID-19 cases per 10,000 Scott County residents reached a number between 40 and 50 for three consecutive days. PRAT decided the school board should choose the specific number within this range.

By specific location, masks are also now required when 5% of a site’s student population tests positive for the virus. The requirement would revert back to recommending mask usage when the percentage falls below 3% at that site for five consecutive days.

Each school board member voiced their opinions on PRAT’s recommendations before voting.

Board chair and PRAT member Kristi Peterson said passing the motion would improve safety for those in the Shakopee community.

Board Vice Chair Judi Tomczik shared these sentiments when announcing her decision to vote yes on the motion.

“I believe in choice … but sometimes, choice takes a backseat to safety and caution. This is one of those times,” Tomczik said.

Christiansen vocalized his concerns with the motion during the discussion period. While sharing his thoughts, he was applauded and thanked by crowd members opposing the motion.

“I cannot support this … I have yet to find one peer-reviewed study that says masking is beneficial,” Christiansen said.

The motion was carried by a 6-1 vote, with Christiansen voting against it.

During the meeting’s public comment section, some Shakopee residents addressed School Board members about their concerns with children wearing masks in school.

While addressing the board, Shakopee resident Aaren Tate said she does not approve of the school board’s efforts in addressing her concerns.

“We’ve elected you to take care of our students, and I don’t think you have been doing that well,” Tate said.

Some in the audience against mask requirements brought signs to emphasize their opinions. These signs included phrases like “My Kid, My Choice” and “Stand Up 4 Freedom.”

Another sign read “Masked Kids = No Levy.” This opinion was supported by some crowd members suggesting they would vote against the district’s proposed operating levy if the board passed the motion on wearing masks.

Similar to the Sept. 13 meeting, attendees again remained vocal past the public comment section of the meeting.

Throughout the night, school board members advocating for the motion were interrupted by the audience. Multiple members were regularly heckled and accused of providing inaccurate statistics and information regarding the pandemic and the efficacy of masks.

Some in the crowd even projected frustrations onto each other. Verbal altercations were heard during the first half of the meeting between residents for the motion and those against.

After the motion officially carried, Peterson called for a 15-minute recess before resuming the meeting. During this time, much of the crowd against implementing the motion left the Thrust Stage.

Those deciding to stay for the remainder of the meeting spent the recess reacting to the vote and discussing it among fellow attendees.

Jackson Elementary School teacher Erica Casey reacted to the decision with fellow educators, saying she was appreciative of the board’s decision.

“I am just very thankful that the School Board decided to continue the mask requirement because it’s all about the safety of our children,” Casey said. “This is a precaution we need to take in order to keep school full-time in class and in person.”

Christiansen also responded to the voting decision and meeting atmosphere after adjournment. He said despite disagreeing with the motion results, it is necessary for everyone to respect the board’s voting process.